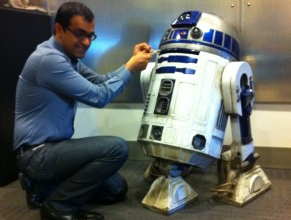 Yesterday, George Lucas sold Lucasfilm to Disney for $4.05 billion. This is astonishing. Disney’s acquisition of Pixar was gaspworthy, but logical, even predictable. Disney’s acquisition of Marvel was a surprise, but clever and additive to the Mouse’s demographic reach. But this is on an entirely different level. Not only because Star Wars is the greatest film ever made, but also because it represents one of the most compelling examples of The American Dream. George Lucas started by telling a story, but ended up creating and personally owning one of the dominant pillars of the world’s entertainment industry. But this article isn’t about the deal itself. Setting aside the global childhood antitrust question, it doesn’t really affect me as to who owns what. Besides, you already read those “may the mouse be with you” articles yesterday. Instead, this article is about the footnote at the end of the story. The tantalizing tidbit that represents a supernova in the world of science fiction. This article is about Episode 7.

When Return of the Jedi came out, I called Lucasfilm to find out more about what happens to the characters. I spoke to a very polite lady, who informed me that they were planning a total of nine movies to tell the full story. Three that would predate the events of the Star Wars trilogy, and three that would follow in chronology. I was thrilled. I didn’t think to ask for a timetable at the time, I was happy enough knowing these were coming. I waited, and got two Ewok movies, and two animated TV shows, but these were clearly not what the lady was talking about. So I waited. And waited. And grew up. Well on second thought, maybe I didn’t grow up, but I got interested in other things too. Then the Special Editions came out, with the promise of the long-awaited prequels. This was fantastic news. The Special Editions then served as a periscope to the future of what those prequels might look and feel like.

Then the prequels came out. There’s plenty of commentary on the Internet about these films, but I loved the return to the Star Wars universe, and the origin stories George Lucas told. They weren’t exactly what I expected, but it’s difficult to give people exactly what they have in mind with a prequel. In my mind, I imagined that all three films would cover the arc that we finally see in the second half of Revenge of the Sith. Similarly, in the world of great science fiction novels, I expected Prelude to Foundation to tell the Hari Seldon story that eventually gets told in Forward the Foundation. So this is by definition difficult territory. But with the Star Wars prequels, Lucasfilm was saying this was it. Star Wars was only going to be a six-film arc after all. This was a melancholy note, after believing one thing for over two decades. Maybe realizing that sometimes big promises don’t get kept was the growing up that didn’t happen earlier.

But yesterday, that changed. Always in motion is the future, and we have our three final sequels back. George Lucas has written a treatment for each of them, and Disney will make all three, with new filmmakers. Lucas will stay on as creative consultant, with his longtime collaborator and genius in her own right, Kathleen Kennedy, overseeing everything. Is there room for hope?

The Late Sequel in Film and Novels

Let’s look at the pattern. For iconic science fiction returning after decades, the record is mixed. Ridley Scott’s recent return to the Alien universe with Prometheus took away much of the mystery and instead presented a story that was more illogical than mysterious. But it looked stunning. Going back a bit, the cinematic return of the monolith in the film 2010lacked Stanley Kubrick at the helm, but was based on the writing of original co-creator and science fiction grand master Arthur C. Clarke. Alas, like Prometheus, it answered too many of the sublime open questions from 2001: A Space Odyssey, but added another unwanted visitor, a hammy parable about Cold War shortsightedness. Looking to other iconic films outside of science fiction, from friends Francis Ford Coppola and Steven Spielberg, one can say that The Godfather Part III and Indiana Jones and the Kingdom of the Crystal Skull also suffered too great a distance from the original material, even with the original creative teams in place. The outlook appears to be grim.

But let’s look at this from another axis. Instead of removing science fiction, let’s remove film, and replace with novels. Isaac Asimov returned to the greatest written science fiction trilogy of all time, his extraordinary Foundation series, thirty years later with Foundation’s Edge. The book was different in tone and even format, but absolute genius. He threw out several key presumptions from his original works, and delivered something that at once worked for a modern audience, and also fit seamlessly into the narrative. Similarly, Frank Herbert returned to the Dune universe decades later with the fourth book, God Emperor of Dune. This was also dramatically removed from the earlier works, set millennia after the events in the original Dune trilogy. The effect was similarly dazzling. All our assumptions about characters were challenged, yet the ruleset was the same. Both books were critically acclaimed and huge bestsellers. The jury is out on whether this level of success was sustained by the follow up novels. Certainly Arthur C. Clarke had a brilliant turn with 2061, which was unfortunately upended by 3001.

At the same time, these examples aren’t truly apples to apples. All of these late sequels were written by the original writers. What happens when someone else carries on the work, or develops an original treatment? Well, we have examples of both for Foundationand Dune. With Foundation, the late Dr. Asimov’s estate authorized three leading science fiction writers to each write an entry in an intermediate Foundation trilogy. The first was tonally off, the second was pitch perfect, and the third sought to tie everything together. With Dune, Frank Herbert’s son Brian Herbert, along with prolific science fiction writer Kevin J. Anderson, created a couple of new trilogies and intermediate stories. At first they wrote prequels inspired by Frank Herbert’s work, but then they found treatments for Dunestories written by Frank Herbert himself, that they used to write two very satisfying Dunesequels.

Looking at this information, something strange emerges. It seems that late sequels, at least in great science fiction, aren’t uniformly awful, and actually having a fighting chance of being fantastic. Even when the original creator isn’t driving.

So what should Kathleen Kennedy do? The two key starting components are the director and the writer. As for the writer, she doesn’t have to reinvent the wheel, she should really consider Lawrence Kasdan. Kasdan completed the screenplay for The Empire Strikes Back after Leigh Brackett passed away, and went on to write Raiders of the Lost Ark andReturn of the Jedi. He already knows how to turn a George Lucas story into a brilliant screenplay. There’s a couple of hitches though. One is that Kasdan went on to direct, so I’m not sure he would want to just write again. Plus, he wasn’t involved with the prequels, so perhaps one side or the other has simply moved on from that collaboration.

So, let’s next take a look at director, since in some cases we get two for one, meaning there’s a few filmmakers out there who both write and direct. Some even have a track record of making magnificent films out of other people’s original works, such as James Cameron with Aliens, and Christopher Nolan with the Dark Knight films. However, these filmmakers have already achieved so much success carving out their own narratives, that they simply may not be interested in collaborating with someone else’s vision for their next projects. While Steven Spielberg and Francis Ford Coppola have worked with Lucas before, they similarly may feel that Star Wars carries too much of Lucas’s narrative voice to accommodate another Olympian vision. This approach seems to work best only when the original creator is long gone, and a reboot is required, such as with fellow Olympian JJ Abrams’s new Star Trek films.

Which brings us to the perfect model for our thinking. Star Trek. Blasphemy, you say? Hear me out. We are now, with Star Wars, in exactly the same position we were with Star Trek, when the Star Trek film series started. The original creator, Gene Roddenberry, was no longer driving the story, and a film studio owned the franchise. Roddenberry was available as a creative consultant, but it was up to the studio to create a late sequel to the TV show. Their first attempt was grand gaping space opera directed by the legendary Robert Wise, which wasn’t truly effective. The next thing they did was get Nicholas Meyer to do what he could with the waning series. Meyer did nothing less than save Star Trekwith his virtuoso Wrath of Khan. Partnering with producer Harve Bennett, they took the material to heart, creating a literal sequel to an episode of the TV show. They brought back the same actor to play the villain, and wrote a pitch perfect story. The film is a standalone classic in its own right, and arguably the best Star Trek film made.

Now, I’m not necessarily saying attach the Nicholas Meyer, but rather find a Nicholas Meyer. Lucas did pretty much the same thing with The Empire Strikes Back, asking the late Irvin Kershner to direct the film. Plus, Lucas says now that he wants to hand Star Wars over to the next generation of filmmakers, so perhaps finding the next Nicholas Meyer is already at the top of Kennedy’s to do list. This seems to me a weighty challenge. There really haven’t been too many breakout genius efforts in science fiction cinema lately. It doesn’t help that everything seems to be a poor remake or a reboot. But maybe we can find inspiration in that direction. Ron Moore’s television reboot of Battlestar Galactica is dramatically superior to the original series, both as hard science fiction, and broadly appealing character-based drama. I wonder if he’s busy.

Which brings me back to the idea of Episode 7 possibly actually being a good movie. Is there room for optimism? Can we apply an armchair historical analysis to predict the quality of a movie that hasn’t been made? Should we just occupy Ron Moore’s lawn and try to make him do it? I don’t know the answers, and previous paragraphs to the contrary, I’m trying not to over-think this or build unrealistic expectations. All I know for sure is that Star Wars is back. And I’m smiling. I’ll see you there opening night.