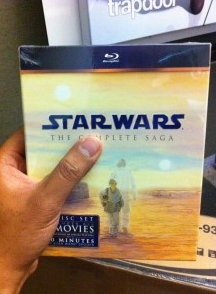 After writing an article on backing away from materialism, and the piece on the retail digital revolution, it may seem utterly hypocritical of me to now call for the top ten blu-ray discs I want. So first, let me qualify my position on materialism and blend it with my view on repetition. First, I seem to be removing material of middle to low quality, use, and value. I’m certainly keeping a few high value items. These things that stay get used or appreciated frequently. They have meaning. Certain games, movies, and books bear repetition, not only for their inherent quality, but for the associated memories and new emotions they trigger. And having Alien on blu-ray has made life a lot better. But it also underscores what’s missing. Here’s a quick run-down on what’s still needed:

9. Finding Nemo. This one seems obvious. Come on Disney, what else is going on over there? My daughter would love this. And it would look spectacular in 1080p on my Kuro. Which I am not giving up.

8. The First Men in the Moon. This is a classic Ray Harryhausen-blessed telling of the H.G. Wells classic. I’m holding onto the DVD, and the Laserdisc is encased in carbonite on my wall.

6. After the Fox. A lesser-known Peter Sellers tour-de-force. He plays a criminal mastermind working a caper across gorgeous 1960s Italy. The story simultaneously mocks Hollywood, celebrity culture, law enforcement, the legal system, the clergy, and youth-obsession.  Trust me on this.

5. Tonari no Totoro. I wouldn’t think twice over a Miyazaki box set.

4. The Abyss. Another James Cameron classic. How can this not be on blu-ray? Come on. And I’d like both the original theatrical edition and the special edition, which restores a meaningful alien judgment thread.

3. E.T. This was an essential part of my childhood and I want to share it with my daughter. Original version with guns please. I’m okay with the walkie-talkie version being included too.

2. Raiders of the Lost Ark / Temple of Doom / Last Crusade. This has actually been announced. It’s in my Amazon shopping cart. It looks like it includes the fourth movie, but that’s okay with me. I already bought the Alien box set and paid for the third and fourth movies that I don’t intend to re-watch either.

[Three glasses of champagne from the Android release of Crime City]

1. Star Wars / Empire / Jedi. Apologies to close friends who tolerate this conversation at least once a month. In 1977, Star Wars, the best movie ever made came out. In 1980, its sequel dropped, widely regarded by many as superior to the first. In 1983, the finale was released, with a dramatically powerful and personal conclusion. These films featured a vision and groundbreaking special effects that dazzled audiences, critics, and awards judges. These films have yet to come out on blu-ray. I bought the special edition box set when it came out. I enjoy the new bits on their own merit. I like the new Jabba scene with young Harrison Ford. But when I got the box set, I only watched the deleted scenes (holy moly) and half of Empire. It’s true I had other distractions that evening, but I haven’t gone back to watch Star Wars yet. I may spin up one of the Laserdisc versions, for ceremonial purposes, or just play the DVD version included in the last reissue (sorry Justin, I know I agreed to lend you that box set, but really, no fucking way). And that’s the version I want to show my daughter. Surely there’s commercial value in releasing them in HD, and all other classic films exist in both original and upgraded versions. In some cases, I prefer the upgraded versions, as in Blade Runner and The Abyss. I have nothing against upgraded versions. I just like choice, and when it comes to the best movie ever made, I want the version I saw when I was a boy. Please. Pretty please. With sugar on top.