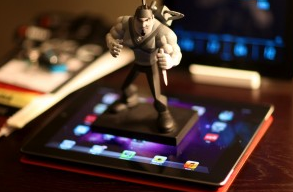 XBLA, PSN, and Indie developers, that ship has sailed. Your work was voraciously consumed and heroically touted by a handful of fanatics who truly, deeply appreciated your artistic and emotional contribution. It looked promising with some early successes trending up. But then it flattened. it never got big. It stayed niche. And then it dipped. Part of the issue is that the console that does everything never even admitted on television that it had an App Store. Oops. But also, even if everyone who connected their consoles downloaded your games, the business model in operation would rarely get you a Tesla. Well, maybe one of you. But in general, people’s attention went to the other big console that nobody calls a console. But don’t hate, just think different. Behold your silver bullet, your red pill, your blue ocean – the magical iPad. Or Android tablet device.

Hemisphere Games got to the promised land early with their brilliant Osmos, an ethereal, inner space play experience with cells in motion. I had the privilege of playing the game before its release as an IndieCade judge, voting for it, and arguing for it to win. The other jurors, of far higher pedigree than me, flat out agreed. I handed them the award for Best Indie Game of the Year. But it was a cool hip handshake for the scruffy-looking nerfherders. It wasn’t a contender until it hit the iPad. And then they got big. And I’m not just talking dollars and cents, the game utterly sings on iPad. It’s a beautiful game on a beautiful device, and touch is perfect for it.

Which brings us to a key challenge. At EA Partners, we looked at bringing some of our key Electronic Arthouse titles to the iPad. But they were so controller-dependent that they just fell apart. Virtual sticks suck. Everyone knows this. You can see it in the various configurations offered, they know it sucks. Your big fingers cover the screen on the iPhone, but with the real estate of the iPad, it’s actually almost tolerable. I’ve seen some creative workarounds, such as various actual joystick add-ons, like the 60beat full-sized game-pad that plugs into the headphone jack, or the Zeemote bluetooth joystick for Android. Which works surprisingly well with R-Type. Funny, I don’t remember the game being that brutal. Maybe I’ve just gotten lazy in my old age. But even with a good implementation, who’s going to want to carry a joystick around in his pocket or her purse? That pocket’s already crowded, and her purse is full of all the things that don’t fit in your pocket.

So no carbon copying. Unless your game doesn’t depend on pixel perfect control. Take for example Journey. In his piece in VentureBeat, Rob LeFebvre made the point that the exploration and natural discovery aspects of the game do not depend on perfect combos or reticule targeting, and could have easily been made for the iPad. He goes so far as to assert that the new iPad is for gaming. And it’s true. Early adopters get iPads. Early adopters like games. Early adopters like to spend money on cool things that show off their new gadgets. Anything Retina-optimized is automatically preselected for greatness. But unlike consoles, there’s no stigma with an iPad. You can have your hardcore action, and still pull it out at business meetings. You pull out your Vita, and well, people are going to think you’re an overgrown man-child living at home, unable to order drinks for a lady.

And before you say it, as much as I love Valve, Steam isn’t your salvation. It’s just a game portal. Niche. On PC. Too much tinkering for normal people to tolerate. I may be an unusual case, in that I have no PCs, and had to install a Boot Camp partition to play The Binding of Isaac. But most people prefer convenience. They don’t want to have to make sure they have the right graphics card, all the right drivers, and worry about how much further this latest install is going to junk up and fuck up their PC. That’s why consoles have been popular for games, they’re a software-hardware integrated unit, with little variation. You buy the game and it just works. Which is the Apple mantra. iOS devices have the same consistency and reliability to the consumer, although iPads have the singular, breakout advantage of that giant, gorgeous screen, perfect for games. However, even more elemental that convenience is price. Pricing in traditional game markets, online and brick and mortal, is still $10-$60. People, please. Stop making your customer scrutinize their purchasing decision. On iOS, the pricing for almost all entertainment is either free-ish, or $0.99 to $6.99. People don’t think about buying a song or buying a movie, it’s disposable income. That’s how entertainment goes big.

Indies, don’t bother placing your next masterpiece in a stillborn marketplace where the purchase is scrutinized. We want your brilliance with us, on the go, shareable at cocktail parties and when we’re home for the holidays. We want everyone to know how great our industry can be. It doesn’t have to be free to play if you don’t want it to. You could have your cake and eat it too, like Infinity Blade.